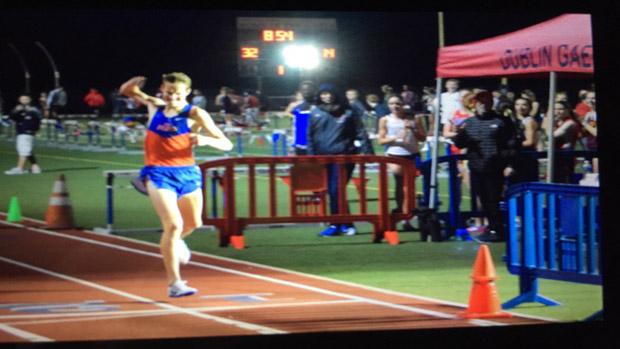 Looking Back at Weekend 4:

It's hard to believe that here in California, a dry weekend is now an unusual occurrence. This past weekend, blue skies were the norm and top efforts were posted all over the Northern part of the state. Leading the way for NorCal meets was the Dublin Distance Fiesta which has slowly but surely become one of the largest distance only meets here in California. This year's version included 86 teams and 1990 students competing in the all day affair. The 1600 meter races started at 8:10am with Hannah Fishlow of Miramonte finishing ahead of defending champion Cassi Land of Sonora. Both girls dipped under the meet record time with Fishlow winning at 5:02.79. In the boys race, two SJS athletes led the way with Daniel Ambriz of Merced winning in 4:17.51, just ahead of Alec Woodson of Armijo at 4:17. 93. The 800s followed up next with Aimee Holland of Santa Rosa winning a wire to wire effort in a new personal best time of 2:18.48. The class of the boys' field was Willie Hall of Davis who negative split a 1:56.88 to easily one another coveted sombrero. The main event of this meet turned out to be the 3200 meter races as the top 3 athletes received the golden ticket to the Arcadia Invitational night meet 3200 meter race. Brooke Starn of Monte Vista did most of the heavy lifting leading the way from the gun. She was finally caught by league rival Megan McCandless of Granada with a lap go to but the race was far from over. Kristen Leung of Lowell patiently waited to unleash her fearsome kick as she passed both runners with a little over 200 meters to go. Her final time of 10:33.71 is now the fastest time in the nation. McCandless and Starn will both join Leung at Arcadia with their 2nd and 3rd place finishes respectively. The boys race featured many of the top NorCal distance runners. After a rather ordinary first lap, Michael Vernau of Davis roared to the front and very quickly spread out the field. Cooper Teare of St. Joseph Notre Dame and Luis Grijalva of Armijo hung on the Vernau and maintained their position until the last lap. With 400 meters to go, Teare went by Vernau and hung on for the win. Grijalva finished in 3rd place. The top 3 competitors all dipped under the 9 minute mark with Teare's 8:56.07 now leading the nation in the 8 lap race. Brooke Starn came back to anchor the winning Monte Vista distance medley relay team in 12:16.21. Michael Vernau also came back to anchor the Davis boys team as they edged out Bellarmine in 10:23.93. 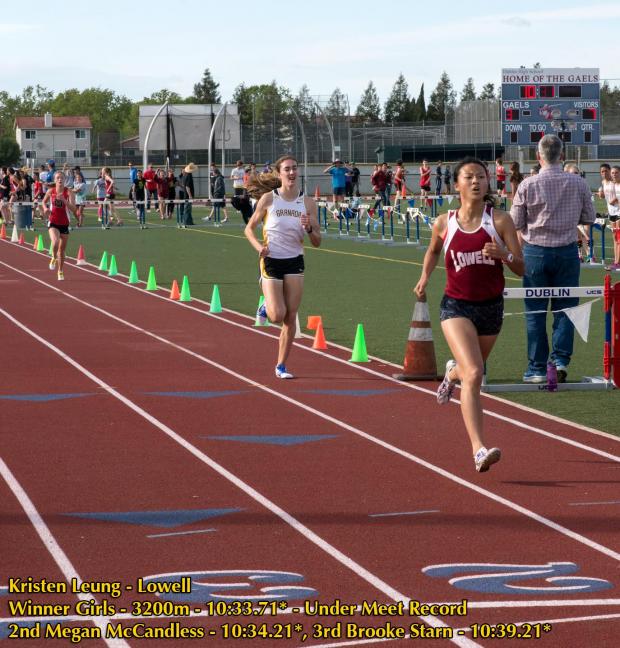 In the Sacramento area, the Husky Invitational hosted by Sheldon had some very competitive efforts. The top marks were both recorded by Vacaville HS athletes as Hannah Davis won the 300 meter hurdle race in 44.49. The Vacaville 4 x 400 meter relay won the race in a near state leading time of 3:53.13. Franklin teammates Kara Smith and Tatiana Jimenez both dipped under the 2:20 mark in the 800 with Smith winning at 2:19.77. On the boys' side, the top marks were recorded by Clinton Spellman of Laguna Creek who won the 200 meters in 21.99, Donavan Hawkins of Franklin who won the high jump in 6'7" and Jack Gabbard of Vacaville who outdistanced the field in the shot put with a winning mark of 52'0.5".

At the Soquel Invitational, the girls posted many of the top marks with the usual suspects in that area shining once again. Santa Cruz senior, Cate Ratliff, won the 3200 meters in 10:37.17. Cassie Ackerman of San Lorenzo Valley broke a long standing school record in the high jump by soaring over 5'7". The top two vaulters at this meet are also two of the best in the state. Erika Malaspina of Pacific Collegiate won with a winning mark of 12'10" just outdistancing Sydney Jacques of Presentation (12'6"). The top mark on the boys' side was Sam Schubert of San Lorenzo Valley who won in a school record 14.63 in the 110 meters hurdles.

Finally, the top field event marks that were recorded this week occurred at West Catholic Athletic League (WCAL) meets. Elena Bruckner of Valley Christian SJ is the best thrower returning from last year's state meet. During the past week, Bruckner recorded a 52'6 shot put and just yesterday, she hit another discus bomb with a 181'1" mark. 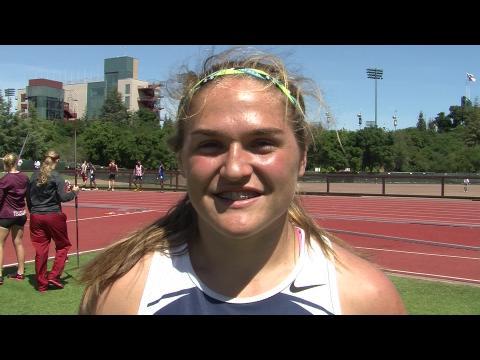 Looking Ahead to Weekend 5: