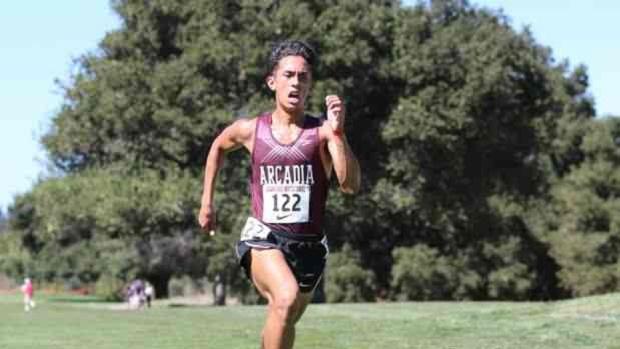 Phillip Rocha passed up the sure thing - a guaranteed berth at NXN this weekend - to compete for one of 10 spots in San Diego next weekend. Then again, who's going to beat him at Mt. SAC?

Runners from all over the West will descend on Los Angeles this weekend to participate in the final Foot Locker regional meet.  Top talent from California, Utah, Arizona, Washington, Oregon, and several other states will compete for the last 20 spots on the starting line in San Diego next week - 10 for the boys and 10 for the girls - in the most prestigious and historic national championship event in our sport.  Others come for the competition, for the legendary and challenging course, or simply because they love to run and they want one more race to stave off the inevitable end of this cross country season.  Whatever the reason, the runners will toe the line in 13 waves starting at 7:10 AM, with the seeded races last at 9:50 and 10:30.

As always, the competition to get to Balboa Park will be fierce, and as always, Californians will be right in the thick of it.  One thing is almost certain: somebody that we fail to mention in the preview will run out of his or her mind and get into the top 10.  Still, check out the most likely out-of-state and in-state contenders below, and don't forget to come back for live updates, results, photos, and interviews throughout the weekend!

Given the population of the state, Montana sure does produce a significant number of big-time girls!  Big Sky Country sent three to San Diego last year, and two of them were freshmen. Bryn Morley is not registered, but top returner and US #6 Annie Hill (Glacier MT) is back to race for another top-10 finish, and perhaps that rarest of achievements: a shot at 4 straight nationals appearances.  A pair of Washington runners that raced well last year will be back, as well: Jordan Oakes (Holy Names Academy WA) finished 11th last year, and you can bet she still feels the sting of that oh-so-close finish, while Brittany Aquino (East Valley WA) was 13th.

Of course, nobody is more familiar with the Mt SAC course than the top runners in California's Southern Section, and nobody was stronger in the Southern Section this season than Amanda Gehrich. The Tesoro senior steamrolled the competition all the way up to the state meet, when she met her match in two runners from NorCal.  Gehrich was the 8th-fastest girl in the California State Meet, narrowly missing the cut for NXN, but she will be a prime contender here.  So will Lauren Moffett (Clovis North), who was 7th-best at states, although she has never run Mt. SAC and therefore doesn't have Amanda's detailed experience there.  Claire Graves (Citrus Valley) and Kendall Derry (Bella Vista) both made it to nationals last year, and that experience could pay off again. Graves had a tough state meet last weekend, but the week before she battled Gehrich all the way to the wire on this very course; Derry has actually been better this season than last, when she sat out a big chunk of the year due to injury (although that left her fresh for Foot Locker).

Since the out-of-state talent seems to be a little down this year, the door could be open for the Golden State to increase its participation over the 5 girls that made it to San Diego last year.  There is a long list of California girls that would like to emulate Derry's race last year and slip into the top 10.  Stefani Gaskell (Sultana) turned heads with a strong performance at the state meet, as did Cassidy Haskell (Miramonte), and Emily Virtue (Burroughs) has been strong all season.  Michelle Magnani (Moorpark) is registered, and though she did not have a good day at the state meet she has the ability to stay in the top 20 here if she is healthy.  We could probably add 5 more girls with at least a decent shot to advance, as well, so it should be exciting in the first big pack during the middle of the race.

Phillip Rocha (Arcadia CA) had a guaranteed spot in Nike Cross Nationals this weekend by virtue of winning the California state meet, but he passed it up for something that is far from guaranteed.  Like everyone else, he will have to race for a spot in the top 10 to earn his trip to San Diego.  Unlike everyone else, though, Rocha has owned Mt. SAC this year, and he is also undefeated throughout the season.  The senior, ranked US #2 by MileSplitUS, tied the course record back in October, and the closest anyone has been able to come to him (on this course or any other) is about 3 seconds.  Rocha would certainly love to claim the course record as his own while establishing himself as a threat to win the national meet.

One runner who had a fantastic race at the 2014 West Regional: Callum Bolger (San Luis Obispo CA) finished 15th, making him the 3rd-fastest returner from that senior-heavy meet.  Bolger hasn't seemed quite as sharp this year, but it's clear he has the potential to crash the top 10.  This year's star newcomer could be Cooper Teare (St. Joseph Notre Dame CA), who ran 14:48 during the Mt. SAC Invite. Teare has had some epic individual battles with last year's 19th-place finisher, Jack Van Scoter (Flintridge Prep CA), including a near-tie at the state meet and a 3-second loss on this course in October.  Those two could very well push each other into contention for berths in the national meet.  In terms of experience on the Mt. SAC course, Andrew Burkhardt (JSerra CA) probably has the biggest advantage, and he has been running very well lately.  Under the right conditions, Michael Vernau (Davis CA), Dylan Scarsone (Canyon Anaheim Hills CA), and Miguel Villar (Madera South CA) could all advance.

It's never easy at this meet for the guys from the Golden State, and this year is no exception. Garec Bielaczyc (East UT) is the only returning national qualifier from 2014, one of only two juniors that advanced (the other, Austin Tamagno, opted for NXN this time around).  He headlines a strong group of out-of-state boys who will be looking to keep the number of California qualifiers low. Talon Hull (Weber UT) finished 16th last year, but he has had a magnificent season, moving all the way up to 15th in the Flo50 National Rankings. Another strong contender for the top 10: Dallin Leatham (Viewmont UT), who finished 7th at NXN Southwest and narrowly missed out on a berth in NXN.  Justin Janke (North Central WA) and Tibebu Proctor (Northwest School WA) also look like at least top-20 candidates, with a chance to break into the top 10.  Christian Allen (Copper Hills UT) and Austin Stewart (Shelley ID) both finished in the top 30 at this meet last year, putting them among the top 10 returners. Allen looks like he's prepared to make a run at the top 10, but Stewart's times seem weaker - until you look at the courses he's run.  He only broke 16 once last year in the lead-up to a good race at Mt. SAC, and this time around he has run 15:31, so expect him to be in the top 20 for sure.