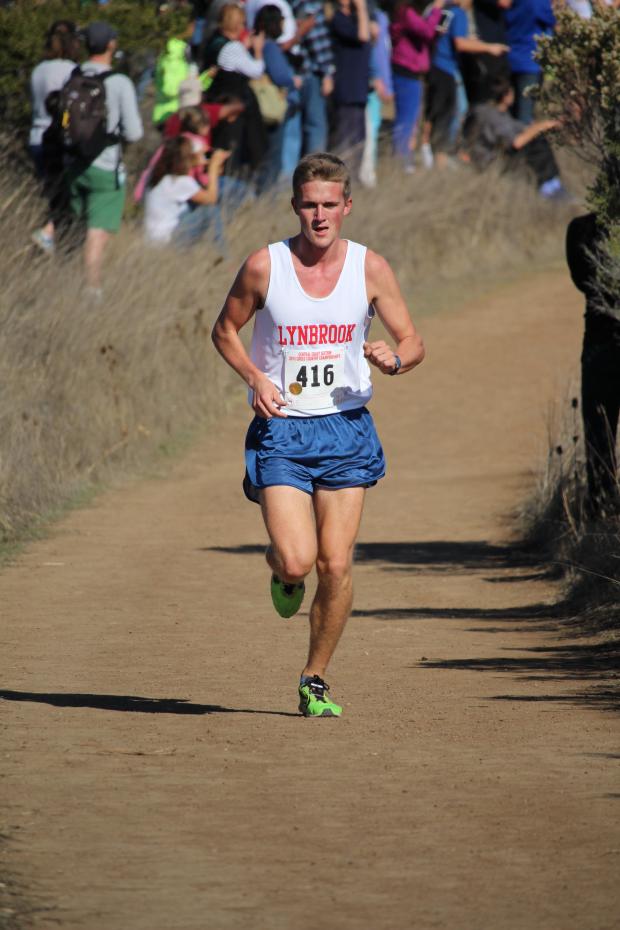 1) When did you get your start in running. What middle school did you attend and what were your PRs heading into high school?
I began running distance in 7th grade. After a 6th grade track season that was fairly frustrating in hurdles, discus, and long jump, I figured that those kids who did fun warmup exercises on the infield had more fun and I wanted to be a part of that group. Plus, I was tired of my hip flexors hurting and wanted a change of pace. So, in 7th grade, I showed up for the distance practice instead of the hurdles practice. I attended Joaquin Miller Middle School. My PR's going into high school were 4:48 in the 1600 and 2:11 in the 800. Both were ran at the county meet at Willow Glen high school in 8th grade.

2) How was your transition going from middle school to high school? What did you learn from your freshman experiences in XC and TF?
The transition from middle school to high school was a big one. I remember that the first practice I went to was over summer and I ran 6 miles with some varsity guys on Monday. I didn't come back until Friday haha! I learned from my freshman experiences that there isn't a shortcut for hard work. I learned that the harder I worked in workouts, the more confident and capable my body was with races. I learned that in high school there is a great family that is built around the cross country sport and I learned that the people you run with you're going to learn a great deal about. I also learned to be humble.

3) Looking back to your experiences in both sports, what are the races that really stand out to you and what are some of your proudest accomplishments?
I would say my proudest accomplishments have come as a result of either breaking a milestone or breaking a record. In chronological order the accomplishments I am most proud of the following:
Freshman
-Making state freshman year in XC
-Winning big frosh-soph meets in the 1600m like Saint Francis and CCS Top 8
Sophomore
-Having a secret race day at the Clovis invitational sophomore year where I was third overall in a huge race.
-Finishing 3rd at CCS finals xc sophomore year behind Foster(Chris) and Haderle (Ben).
-Setting both the 1600m and 3200m frosh-soph records at the CCS Top 8 Classic.
-Qualifying for the state meet in the 1600m finals at CCS placing 3rd.
Junior
-Finishing 4th at CCS xc after having not much training over summer and being nervous all season. Being the fastest junior of the day was a highlight as well.
-Running 8:40 for the 3k at the Stanford track Invitational.
-Winning third place at the Arcadia open mile in 4:19
-Racing in the CCS finals for the 3200m and finishing in 5th place with aPR, and the only people to beat me were graduating seniors.
Senior
-Hot streak of confident and solid wins and high finishes.

4) You had knee surgery before your junior XC season. What was the cause of the injury and what did you have to do during the recovery period?
The cause of my knee problem that occurred the summer before my junior year is a bit of mystery. I believe it to be from a very long and exhausting track season combined with an insufficient taper from running and then jumping back into running too quickly. That summer was excruciating for me. I was devastated at not being able to get my daily endorphins from running which forced me to look elsewhere for exercise. I put in a lot of time at the YMCA riding a bike for an hour straight and just seeing how far I would go. I started doing some basic body weight lifting to strengthen ligaments and hip/glute strength. I really got into mountain biking, and once I found a friend's bike that I could ride on, I immediately switched from the YMCA (first half of summer) to riding trails at Fremont Older open space preserve. After surgery, I was in physical therapy and doing the exercises and strengthening as much as I could so I could get back to running. The surgery separated two membranes that had gotten fused together, and in doing so opened up some space in my knee that allowed movement without pain. I slowly eased back into running that season, and had to play catch-up to everyone's endurance capabilities throughout the season. Ironically, the only thing that hurt to do that summer in my knee was run. Swimming, biking, walking, all fine.

5) Tell us a little about the runners, coaches and/or adults that have inspired you during your running experiences before and during high school.
I have to say my coach (Jake White) has largely been my inspiration throughout high school. I have been very fortunate to have a great coach that pushes me to the limit and opens my eyes to what I am capable of achieving. He has developed me as a runner and led me to great success.

I would also say the most recent notable alumni from Lynbrook (Luca Signore) has inspired me. His records are ones that I have chased after for four years, and his story about running for a Division 1 college has helped inspire me as to what I would like to do as far as college running. Additionally, he is a fantastic guy to go run with, and I was fortunate to train a lot with him over summer.

Lastly my cross country team has been instrumental in inspiring me. We really came together last year to qualify for the State meet as we finished second in Division II as a team. This fall, we trained and were inspired to try and qualify again. Unfortunately, we were unable to do so.

6) In terms of training, what has changed for you whether it's in the off-season or not, that you feel has made you a better runner?
Off season doesn't exist much in the terms of a runner. There are periods of slow running and a week of rest here or there, but as far as large periods of rest, that's very much not in the training plan. Over my four years, I've found that prevention is pretty key. Also, strength training has proven very beneficial to me. Combining that and icing whatever hurts any day of the week after a run has helped me have a phenomenal senior cross country season.

8) Heading into the CCS final, what was your plan going into the race? Any surprises during the race? How did you feel about your time and effort?
Heading into the CCS final, I knew I had the fastest time in Division II by around 8 seconds (next fastest being Ben Zaeske of Los Altos). I figured that I would have to go out fast and strong to try and tire my competition in order to win. So the 4:45 first mile was an attempt to tire out the rest of the competition and get ahead of the chase pack. There weren't any surprises during my race, but overall I wasn't too keen on the time or how I felt. I know I could've gone faster had I not had a small cramp in my stomach or that crazy wind.

9) Have you decided where you will be attending college? If not, how much will running impact your decision?
As of right now I have not decided where I will attend college. Running will play a big role in where I ultimately decide to end up and because of that I am using all five of my NCAA visits to truly get a perfect picture of where I would fit in best.

10) From your own experience, what would be your advice for a young successful freshman runner and how he or she can continue to build on early success?
My advice to someone who has had great success as a freshman is continue putting in the work. A fantastic goal for someone who is determined to do well is if you're not number 1 in a race or in CCS, be the fastest in your grade. Be the fastest 15 year old in your area. Basing success off of those aged around you instead of those in high school around you narrows the field and gives opportunity to pinpoint growth and pinpoint who you really want to beat. If you want to get faster, run with the faster kids. A freshman training over summer with a varsity team is bound to get faster as long as he/she is fit and not rushing the mileage too fast.

11) Someone is undecided about joining the XC team. What would you say to convince them to join the team?
Cross Country isn't just a sport about running. It's a sport about a family. Cross Country may be hard when you race, when you do a workout on the track. But the majority of Cross Country is running with your friends. And when you talk and laugh, the miles fly by. Running is a lifetime sport. You can do it throughout your life. Plus, all you need is a pair of shoes that are comfortable and the willingness to push yourself. The first week of running is always the hardest. Whether you've been running for 10 years or never. After taking a break and coming back to running, the first week is always the hardest. Once you get past that? It's easy!

12) Anything else you would like to add.
Listen to your body. IT band hurts? Roll out. Hips sore? Stretch. Shins hurt? Freeze water in paper cups, tear off the bottoms and rub it on your shins like a gluestick. Works wonders. And if you ever can't get loose enough on your own, get help. Chiropractors. Massages. Every good runner has some form of help. Mine? It's a secret.